How can you not be happy when you have a student who, when she’s “grown up”, wants to be either a tooth fairy, or a cheeseburger?

Thank you God.
Thank you for placing this wonderfully innocent personality in my class.

It's going to be a marvelous year!

Note:  I haven’t written in a while, I think because until now I haven’t needed to write.  And maybe that’s a good thing.

It’s been almost 22 years since the accident and closed head injury that nearly took my life…but things are still popping up.

Since about the summer of 1993 I’ve been having these “things”, as I call them, and until now they have been a mystery.

I can feel them starting and they’re a strange feeling that kind of moves over or through me like a wave.  It builds in intensity to a peak and then tapers off.  They feel like they last for 5 to ten minutes, but Melissa, who has witnessed more than one, tells me they only last for about 30 or 40 seconds.

My speech comes out in nonsense words, yet I can tell I'm not making sense.   I can feel myself trying to communicate, I know what I want to say and I can even hear the correct words in my head, but the words that come out don’t make sense.  Not even to me.  Once I had one while teaching a math lesson and I kept teaching but I felt like I was saying everything twice.

After having these “things” every 3 to 6 months for almost 20 years, going to several doctors and having multiple MRI and EEG tests without results I had given up hope of ever getting a true diagnosis.   I had just gotten used to having them and moving on with the day.

However, I recently had one while eating dinner with Melissa at home.  I felt it coming on and said, “One of those things is starting.”

Honestly, I don’t remember if I could answer them.

She’s seen them before, but this one scared her.  That’s why I agreed to go to the doctor AGAIN, but I wasn’t expecting much.

Long story short, Dr. Gerhardt found (after looking at my MRI for about 5 seconds) scarring on the left side of my brain that he said is causing a discharge.  I believe it is an electrical discharge of some kind.  I don’t know if it’s like a blackout or a power surge, but I intend to ask Dr. Gerhardt at my next appointment.

The doctor also knew right away that these were seizures.

It wasn't until he said that it's possible to die from these that I agreed to start taking seizure medication.  I'm only doing it for Melissa and Macy.

I don’t like it at all and I believe I’m still in denial.

What I do know is that this is weighing heavily on my mind…thanks for listening.

Writing this is like therapy for me.  I’ll probably write more later.

i couldn't find any words that rhyme today

Our year’s winding down,
And it has been long
I don’t quite know why,
It could be my new thong

But that’s not a matter,
That we should discuss
It’s not like I’m some old man,
Wearing a truss

A TRUSS?  What the hell?
Where is my poem going?
There are too many words
And my mind’s overflowing

The year’s winding down,
Yes, yes now we’re on track
Now all that I need,
Is some catchy wise crack

A crack?  Aw HECK!
Now we’re back to the thong,
I’ve got to write something
Or things will go wrong

Not thongs, tightie-whities,
And not boxer briefs
I must write of school things,
To give some relief

I must shift my focus,
To matters of school
There are kids there are teachers,
And both topics are cool

Or the fact that ours days,
Are now down to seven
When you’re in single digits,
You know you’re in heaven

To get thoughts off my thong,
It seems best to say
Relax and breathe easy,
Cause it’s our last Monday!

Years ago I started writing poems and emailing them to my grade level and or school.  Somehow a kind of end of year countdown started a few years ago.  I don't do every single day, I write when I'm inspired.


I decided to post them here.  At least some of them.

There’s a chance it’s just me,
But you may feel it too
Our clocks move quite slowly,
Up one minute back two

Each year at about now,
Our odd time dance gets loose
You feel like your head,
Is stuck in a noose

We know the steps well,
Though it’s not a line dance
You Waltz or you Tango,
You boot-scoot and prance

What makes each dance hard,
It the students these days
They’re bodies all move,
In peculiar ways!

When I say things like that,
You all think I sound old
It’s a damn metaphor!
So read on and don’t scold

But just when you think,
Things have gone on too long
Your feet start to ache,
And you’d like a new song

CG’s voice pipes in,
And she starts with her schpeel
Then the dance floor gets restless,
The excitement you feel

The band plays its last tune,
As you glide round the floor
Then you kick those small backsides,
Right out the front door

Then you rest and prepare,
For tomorrow’s swaray
I never said “booze,”
But you like it that way

For I say every word,
With a nod and a wink
And you know that it’s time,
For a rather large drink

Kim’s growing potatoes,
That we’ll use in fun ways
They’ll be ready to drink,
In just 20 days!

Yesterday, we got a new pool toy.

It didn't stay long, but it was fun while it lasted. 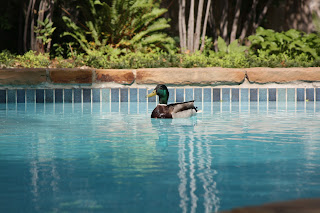 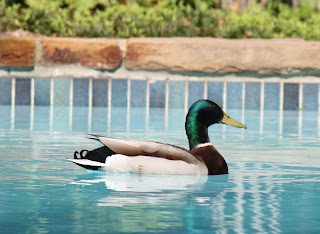 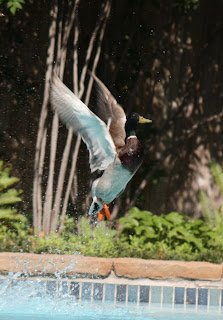 And so we’re on this cruise with St. Maarten as on of our ports.  I’ve been to St. Maarten before.  It’s a fun port with nice beaches.  Melissa and I decided to do an excursion called Rhino Rider.  Basically, a small, inflatable boat with an outboard motor.  It seats 2 and I drove with Melissa on the back.

Our guide led the Rhino convoy of about 10-12 Rhinos.
St. Maarten is a small island that is divided down the middle.  One side is French and the other side is Dutch.

(Well, it’s not really the middle somehow the French cheated and their side is larger…but I digress)
We started on the Dutch side and our guide led us around and through the waterways over to a beach on the French side.  Before we left he made sure to let us know that the French side is a bit more open minded than the Dutch side.  And as such, is littered with clothing optional beaches, and that we shouldn’t be alarmed, or point, or laugh, or giggle when we see these free spirited bathers.
My first thought was, “Hey, I’ll get to drive a fun boat and see some fun sights to boot.”
I was only half right.
Driving the boat was a blast!  I highly recommend it if you ever have the chance.
As for the nude beach…
Well it was somewhat of a disappointment.  For you see, there were two couples enjoying the surf wearing nothing more that sunglasses and smiles.  However, they were also probably five years older than my parents and not in very good shape.
I tried to avert my eyes, but I kept finding myself looking in their direction.  I don’t know why.  Maybe I was hoping I was wrong, maybe I was hoping someone easier to watch would join their party, maybe I was hoping they would put some clothes on.
Whatever the reason, next time someone says, “Nude Beach,” I’ll know not to get my hopes up.
Note to Mom and Dad:  In no way did I mean to imply that YOUR age should keep you away from a nude beach.  I’m sure you both will fit right in.


Just make sure I’m not around 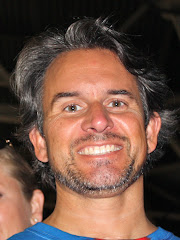